Thank you to Neil Boosey for this account of his incredible experience in this year’s West Highland Way race. Well done Neil!

The West Highland Way Race has a worldwide reputation as one of the ‘classic’ ultra-marathon races.  Taking place on the long-distance trail between Milngavie (just north of Glasgow) and Fort William in the Scottish Highlands.  It attracts runners from all over the world. Entry is limited to 265 runners each year, to preserve the friendly nature of the event. 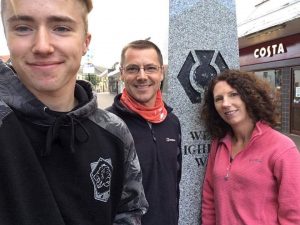 Setting off with 212 others, a precession of head torches leave the station at Milngavie, turning right at the small granite obelisk in Douglas Street, onto the start of the West Highland Way.  I’m trying to keep my excitement at bay and the fish supper in its place. It felt great to be running after the day traveling up and hanging around for the start. 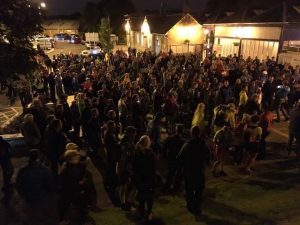 After 19 miles, the first climb, 300m up Conic Hill.  I took off my head torch and glanced back at the lights snaking their way up the hill, then looking north, first light revealed Loch Lomond stretching out in the distance. I had hoped to run this event since hearing about it on Ramblings in 2013, I was thrilled that, at this moment, I was on my way. From the top of Conic, it was tricky stone path down the hill into the first crew stop.

Grabbed a banana, kit kats, water & Shot blocs, but forgot s!Caps (salt capsules) and I was off.  The stretch to Rowardennan was a beautiful track, weaving along the bank of the Loch. I got a bit carried away picking up 10 places over 8 miles.

How quickly things change, this section up to Inversnaid was dominated with steps dug into the side of the hill. Up/down/up/down for miles. Six hours in, my quads were burning and I’d only covered 30 miles, this was brutal.  Then I put a foot wrong and slipped off the path. I fell down the bank, a hand full of bracken stopped me from a ledge, a drop and Loch Lomond. Almost an early bath! I’m helped back up by the guy behind me and continue, slower and more carefully than before. 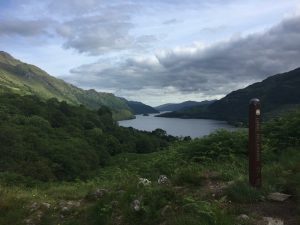 I get past Inversnaid and the terrain is more familiar. Ruth and I ran this section at Easter and the familiarity calmed me down after the fall and I found my rhythm again. At the end of the Loch there is a small hill, with “Dario Melaragni’s Post” from which the views south really are breathtaking. I take a moment to reflect on the beauty of Loch Lomond and think back to Conic Hill, now out of sight at the other end.

The support crews were lined up like F1 pit crews cheering and clapping us all as we arrived. Each with their gear out ready for their runners. Ruth and Nick are set up like pros, seat, cup of coffee, humous & guacamole wrap, water, s!Caps. Charger for my watch & phone. And I’m off.
Glenn Fallon is a wonderful stretch. Big rolling hills with waterfalls and pine forests, I settle into a process of walking up and running down. After the Loch Lomond experience, I decided to use this section to regroup mentally ready to push harder in the following section. I navigated a confluence at the bottom of a farmer’s field known as “Cow Poo Alley”. Today it was only ankle deep :).

Changed shoes, socks and put on rain jacket as the drizzle was getting more persistent. Grabbed more supplies and I was off.

This was the section that I was looking forward to. Past Tyndrum. The landscape changes again as woodland clears to an open expanse with views across to Beinn Dorain & Craig Mahor mountains. I loved the section to Bridge of Orchy – nice and runnable.  Rain was getting heavier and the wind was really picking up but the miles were ticking by and I felt really good. 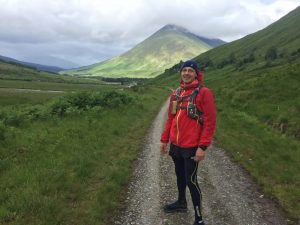 Ruth and Nick were having a well-deserved cuppa in the bar of the Bridge of Orchy Hotel, when I ran through the checkpoint.  Feeling a bit lost I begged some water and headed off along the path. Then I heard Ruth calling. She’d seen me pass and caught me up. Handy as I needed to change maps. From BoO it was a route march 300m up Jelly Baby Hill to where a chap called Murdo was handing out Jelly Babies – I had a black one and took heed of Murdo’s warning “there’ll be a lot of weather on Rannoch Moor”. Gloves on, down the other side to Inveroran 100km covered, 50km+ to go.

The route across Rannoch Moor to Glencoe ski lodge was tough. 40mph winds, 2 degrees celsius and steady rain.  The climb up to 360m was too steep to run, so I walked most of it, getting colder by the mile. A lovely surprise at about 66 miles, Ruth had run down to meet me from Glencoe.  She really cheered me up as I was “hanging” at this point.

Shaking to the core I stripped off and put on two base layers, waterproof trousers, winter hat and borrowed Nick’s Seelskin gloves. I was spilling my tea everywhere as I shook and wasn’t sure if it was safe to continue. Half an hour in a warm car had stopped the shaking and I felt ok again. A pack of chocolate brazils in my pocket I was off!

Slow but steady past Kingshouse then up the Devil’s Staircase. I took another moment to “stop and look aboot”. Even in this terrible weather the view across to Stob Dearg and down the mountain range was awesome. I felt myself relax, and for the first time believed that I could get all the way to Fort William.

Around the hill was a 550m drop down to Kinlochleven, brutal on my already dead quads. People were streaming past me skipping from rock to rock – must be locals. I struggled map reading here as well and managed to keep up with some guys ahead of me down the route and into the town.

After the weigh-in (medical check) I got a bit too settled with my cup of tea. Ruth got me back on my feet and out into the weather. Nick was running this final 15 mile section across Lariag Moor with me. Full of energy he chatted and cajoled me into going quicker, or catching someone up. He even suggested I took longer strides. I really appreciated this, but had nothing in the tank. I was stumbling along, tripping regularly. The loose, stony track was ankle deep in water and so tricky to jog along. Once Nick had to pull me out of a ditch as I’d tripped and fallen in. Time for head torches and a caffeine gel to pick me up.

Past the last mini check point was a boggy track through a cleared pine forest. Then with about 4 miles to go, a beautiful sand fire track appeared. This was wonderful as I could jog without stumbling and having to watch every step. I sent a message to Ruth that we were nearly there. I was so confused at this point as Nick tried to explain how long I’d been going, I couldn’t even make out if it was Saturday or Sunday.

In fits of laughter we agreed to push as hard as possible on this last section and try to finish within 24 hours. It felt great to jog with Nick into Fort William in the middle of the night, we were guided by the sound of cheering and clapping around the corner. Then across the carpark, through the finishing arc and pushing through the ‘famous’ door to the Lochaber Leisure Centre. We had done it! Ruth was there with a cup of tea and helped me buzz in and get through the check/weigh-in.

On Sunday after the mid-day cut off all finishers are presented with “The Bling!” an engraved crystal goblet in a lovely ceremony.
I’m eternally grateful to Ruth & Nick for putting up with me since December when I got the place, and for being fantastic crew long the way.

Also thanks to Ian Beattie and the team who organise this incredible event.

Lastly thanks to Fiona Rennie, who was interviewed on BBC R4’s Ramblings in 2013 abut this thing called the West Highland Way Race, which got me started. By the way, Fiona finished her 13th, yes 13th WHWR this year. 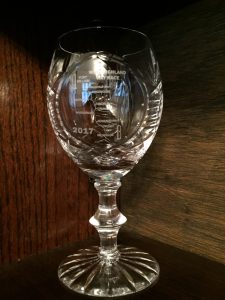