A big thank you to Jon Lawrence for his write-up of his 10th Great South Run! 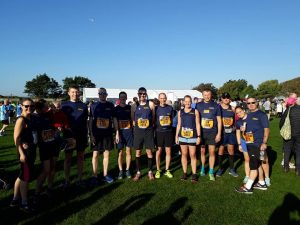 The Great South run 2018 saw the club turn out in force for the annual 10 mile event held in Portsmouth. 34 club members made their way via cars and on the specially chartered Waverly Harriers Express. 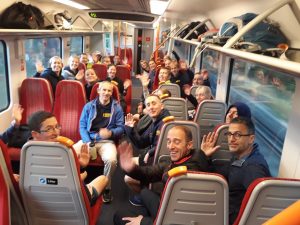 The event is held at the end of October which normally results in challenging weather conditions, such as strong winds and rain, however the day saw some glorious conditions with the sun shining down and very little breeze, ideal to take on the course.

The Great South Run starts and finishes on Southsea Common and is a fast, flat course that takes in the historic dockyard and Southsea, with the last two miles seeing runners heading back along the coast towards Southsea Common.

Nearly 20,000 runners took part in this year’s event and the weather not only brought out many club members but also fantastic crowds making the atmosphere and day memorable for all. Over the years the Waverley Harriers has grown as a club and this was emphasised by the amount of members who turned out for this years event.

For me this was the 10th year in a row running the Great South run. It was the first proper event I ran and has remained a permanent fixture in my running calendar since. I have run it over the years with family and friends and many fellow Harriers, but this year was extra special, being ahead of my 50th birthday and it being my 10th in a row and it was so nice seeing so many fellow Harriers out there both before the race, during and after, when a social club event took place with some much needed and well deserved liquid refreshments. 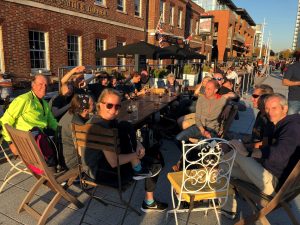 The run sees the 20,000 runners set off in three separate waves so to spread the runners out on the course. Many of the Harriers were out sampling the run for the first time. It’s a well organised and enjoyable run and one of the only official runs over 10 miles, so the distance allows runners to challenge themselves without having to take on a full half marathon distance.

From my own point of view I was aiming to come in under 1hr 10 mins. When I first started the Great South I ran it in 1 hr 18 mins and my aim was always to improve and get under 1 hr 10 mins. My strategy was to go out and run and steady and evenly pace of around 6.50 per mile……..however you know how the strategy sounds great but is often difficult to stick to?.. Off I set having pushed my way to the front of the orange wave, and as I went through the first mile, the watch registered 6.24……hmm. 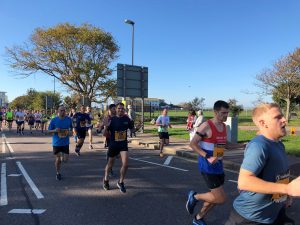 I then tried to settle into a more consistent pace but this wasn’t helped by the drum band at around 3 miles and also the cutback section at mile 4 where you get to see how everyone is getting closer and closer to catching you, so my pace remained above plan.

After running through amazing crowds alongside Southsea Common you get close to the finish line at 6 miles and this for me is where you have to dig in and my pace started to drop as the heat kicked in and my fast start took its toll, however as I said, this is where you dig in and break the run down and start thinking by mile 7, just a park run left!! Turning onto the home stretch at 8 miles the conditions were perfect and the finish line felt within touching distance.

The last mile sees you coming back towards Southsea Common and running past fellow runners going in the opposite direction at 6 miles. With 800 metres to go you start thinking about your track times and I then worked out that if I just kept going I get I would come in under 1 hour 10 mins. A final sprint in the last 200 metres and I clocked 1 hr 9 mins and 29 seconds……job done for me.

If you’ve never done the Great South Run, I’d highly recommend it. It’s a well organised and well supported event and I have already signed up for run number 11 next year, with hopefully many more Harriers coming back for more or to join in for the first time.

There were many impressive performances on the day and many PBs and achievements by the Harriers team with Dave Newby leading us all home in a very impressive 1hr 08.05, as well as Philly Staddon coming in as the 51st female home in 1 hr 10 mins 31. A massive well done to everyone who took part.

The biggest takeaway for me from the day was that in spite of the club growing massively in numbers as evidenced by the turnout on the day, the club hasn’t lost its identity and is true to its values of being a friendly inclusive club with an amazing group of runners.