I write this after running my first marathon, with my medal sitting on my desk reminding me of the incredible achievement and all the hard work that went into running 26.2 miles. By writing this story and sharing my essential top 10 beginner tips, I hope to inspire people who have never done a marathon before and to reassure you that completion time does not matter – I’m a 5-hour 30-minute runner for reference!

If you had told me in 2015 that in 5 years’ time (plus 1 for covid delay) I would be standing at the start line of the London Marathon I would have laughed. I had no real interest in distance running, but after a few years of parkruns, running clubs, 10ks, half-marathons, and watching the London marathon in real life, I decided that I would enter the ballot.

Whilst watching the 2018 marathon and seeing just how many people were running it, I thought two things. Firstly, if a man on crutches could this, so could I. And secondly, it must be easy to get in. Whilst I was right about my first thought, I was very wrong about my second. It is very difficult to get a ballot place and I cannot thank the Waverley Harriers Club enough for pulling my name out of their ballot and providing my route in.

My first beginners guide tip: Train slowly. I was initially meant to run in the 2019 marathon but after training too hard and pushing myself too much, I had to defer my place a year. A hard but important lesson to learn.

My second tip: Get yourself a training partner. Deferring my place turned out to be a silver-lining as it gave my husband George the chance to enter the 2020 ballot, and he luckily bagged himself a place! Training together meant we could be each other’s motivation, and ensured I stuck to my own advice of training slowly with the help of a carefully crafted training plan.

My third tip: Remember the reasons you’re doing this. Although the real reason for entering the marathon was to run it for myself, I also felt it was a great chance to raise some money for causes close to my heart. After losing too many family members to Alzheimer’s, I knew that I had to run for Alzheimer’s Research. I also ran for a local charity, The Meath Epilepsy Charity, where my brother-in-law lives. It really helps with training and they sent me wonderful messages of support both in the lead up to and on the day itself. For me, it was another great motivation to keep going.

Now, you might think the week before involves the most running, but this isn’t the case. It’s important that you don’t tire your legs out, and even more important that you don’t injure yourself. Taking on this advice, I indulged in my other favourite activities – reading, watching TV and eating! I read some running books that I’d been meaning to finish, watched running documentaries and (the best part) I started carb-loading. Tip four: make sure you eat more early in the week to avoid feeling too bloated on race day. Having had my final bowl of pasta, and having laid out my kit, I took myself off to bed at 9pm – something my mother would have loved me to do when I was a child!

I was so excited for the next day. Lots of people talk about nerves but honestly, I just couldn’t wait. I felt my training had gone perfectly, I believed that everything I had done to that point would get me through – I couldn’t wait to show London what I had.

Sunday morning – race day. That morning, George and I headed to the train station to get to the start. We were starting in different locations, although it didn’t matter as I quickly befriended a woman who was going to the same start as me. I’m not a morning person and like most British people, I hate talking on trains. However, that morning was so different. You couldn’t help but swap stories with fellow bib wearers, everyone was so positive and excited just like me.

Tips five and six: Avoid negativity. There will be people out there wanting to tell you about everything that could go wrong. Maybe for some, it can give them a full picture, but I know for me it would just bring me down. Also don’t be scared about the loo queue length – they move fast and you will make your start time. If you’re running late, then don’t worry, that is the wonder of chip timing!

My wave was called and before I knew it, I was at the start gantry, crossing the timing mat, and starting my first London Marathon. As someone who wasn’t aiming for a time, the first few miles were the only occasions where I checked my Garmin just to make sure I wasn’t going off too fast. The rest of the time I just ran to feel, so I could enjoy the moment and soak in the atmosphere. As well as huge supportive crowds, there were also lots of cameras en-route, and at Cutty Sark they had a giant screen up where you could see yourself running. No matter how tired I was, seeing a cameraperson made me go faster (or so I felt) and helped me to focus on my form and relax. I didn’t need to remember to smile though, I couldn’t stop smiling the whole way round! I was loving it!

Tip seven: Spotting runners in fancy dress is a great distraction. I never realised how many people run the London Marathon in costumes, hundreds! It is a great game to spot as many as you can, but don’t worry if someone dressed as a submarine overtakes you, this is your race not theirs.

Tip eight: Put your name on your t-shirt. I put my name on my Waverley Harriers t-shirt for this marathon and I really felt I couldn’t have done it without all the “Go Mady!” shouts. This was especially true when I started to ache at mile 18. The longest distance I had run was 20 miles so I knew I could keep pushing through the tiredness for a bit longer. 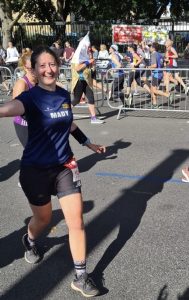 Although I expected to cry at the finish line, as I had after my first half-marathon, I didn’t expect to feel so emotional when seeing my family and friends who were following me around the course. Nothing brought me more motivation than to see my family, waiting with giant inflatable kangaroos, shouting “You’re amazing Mady” alongside countless strangers.

Mile 23 – only a parkrun to go! The slowest parkrun I’ve ever run though. I ate two gels at this point, getting as much energy as I could to keep me running. It was hot, but the organisers had set up shower stations to cool you down, and they even went the extra mile to open up the heavens for 5 minutes. It really did the trick! I saw plenty of walkers at this point, some of whom were even going faster than my run pace, however, I kept thinking to myself just because someone else is walking doesn’t mean I have to. That said, there is no shame in walking and I did resort to this for a little bit, but after I soon realised that this hurt just as much, I swiftly returned to my slow shuffle pace. I was doing as much as I could to take my mind off it, thinking about where would I be if I was running around Broadwater Park, and focusing on the cheering crowds.

Then something incredible happened at mile 26, the moment I saw the Palace of Westminster and Big Ben, all the tiredness suddenly left me. I felt I was flying down Birdcage Walk. 800m sign, 600m, 400m – just one lap of the track! Turn the corner, 385 yards to go! Buckingham Palace was right there and then there it was, the finish line! 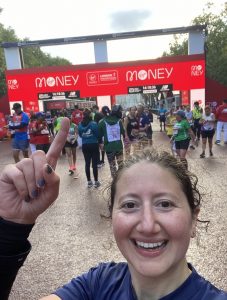 Shockingly, I had managed to be composed over the finish line, but once I spotted my family, I couldn’t stop crying with joy. It hit me, I had really done it, I had crossed the finish line and achieved something I thought I never could. I had just run my first marathon. 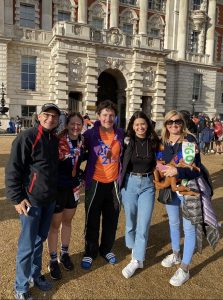 I ended the day the only way you should, with a body slightly broken and confused but with a giant plate of Lebanese food. Later that evening, sitting down to read all my text messages of support and love whilst taking a moment to myself in a warm bath with recovery salts, I (of course) felt emotional all over again reflecting on one of the most amazing days of my entire life.

Oh, and my final tip. Tip ten: Make sure you live on the ground floor, because stairs are impossible! 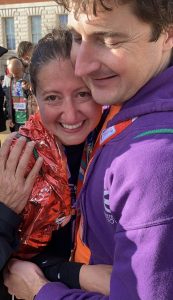