The Manchester was the 5th time I had completed the event, although last year’s became a virtual event, but they all count. I love the city of Manchester, the vibe and its people and this year saw a new modified course that meant we ran into the city centre itself.

I’ve been reflecting a lot on this year’s Manchester Marathon since it happened as I think every run and for me every marathon has its own unique story, and although for me this was marathon number 18, I always learn something about myself.

My training had been going well, but if anything, and looking back with hindsight I was probably over training, especially as I was also training for a 2-mile Serpentine swim a couple of weeks before Manchester. 5 weeks before Manchester I ended up injuring my knee in the Lake District and I honestly thought I wouldn’t be able to run the event, but with a bit of rest and then hard work I got myself back so I could do it. 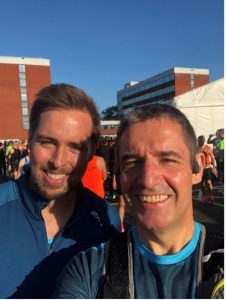 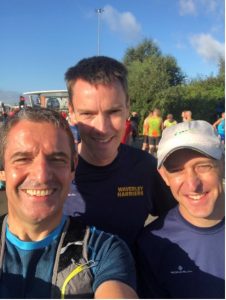 The event day arrived, and I felt OK. I am part of the 401 foundation, and some of you will remember Ben Smith, who in 2015/16 did 401 marathons in 401 days. I had met up with Ben the day before and we travelled down to the start area together on the Sunday too. I was also delighted to bump into John McKenna and Jon McAllen at the start so we could get our “Happy Harriers” selfie with the rules being you could only be in it if your name was Jon!!!

As it turned out the weather was very sunny and a bit too hot but overall, the conditions were good, it didn’t help however that the start was delayed by 20 mins, and we were all left standing on the start line complete with our pre-run nerves for what felt like ages. 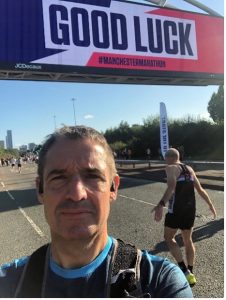 I started off and thought I would run on feel and found that I was holding a good pace for me. The new loop through the City Centre was incredible and the crowds were amazing the whole way so of course I thought, well let’s go with this and see what happens seeing as I was feeling good and holding a consistent pace. I went through halfway in around 1hr 44mins and kept thinking, let’s keep this going, you’ve got this.

At mile 16 near Altrincham, I had just run past and seen John McKenna running in the opposite direction when my knee went, I knew there was a risk of this, but it seemed to be out of nowhere, and I had to stop and walk, which I’ve never done before so early into the marathon. For the first time I had to think, “Well what are you going to do now, you’ve got 10 miles left and they aren’t going to be pretty”.

It’s all very well to keep pushing on when you are feeling good, but what happens when it doesn’t? I had a gel, regrouped and thought, option A is I quit and get the tram back or option B is…….and that’s when I said to myself “Nope, you’re finishing this one way or the other!!!” Option B it was, people have been through far worse than this and so that’s what I did via walking and running (of sorts)!! I took this picture at around mile 20 (I think) to show that no matter how much you are starting to hurt you can still smile and it makes it feel better (although the guy behind me doesn’t share that view, I think) 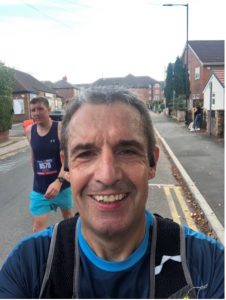 I then kept looking at my watch and started thinking “Hang on, If I keep pushing through this pain and stick with my run walk strategy, I can still finish in under 4 hours and something I’d be pleased with still”

It was the hardest thing I’ve done running wise and I realise the easy thing would have been to give up, but, I have always said I am a gunslinger not an excuse maker (terms I’d heard Mike Gratton use at the Brighton marathon a few years before, Mike won the London marathon back in 1983) and gunslingers get things done. I simply had to reset my goals and finish the marathon.

I finished in 3 hours 56, shattered and emotional. As I said before I always find I learn something about myself in a marathon and this time as I learnt that whilst this was one of my slowest marathons it was one of my proudest when I crossed the finishing line and it’s not just about PB’s. I learnt that I do not give up even when faced with a bad situation. I can still stop and refocus on a different target and that if I say I am going to do something then I don’t give up till it’s done. 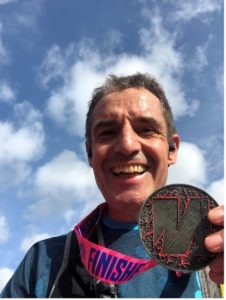 I saw a lot of people during and after the event collapsed or in a bad way which I think was down to the heat and I realise that I am grateful to be in one piece having got round and whilst the legs and knees are sore, I’m still walking.

I will be back for Manchester again in April but now I need to rest and reflect on my training for the next one, which is what a gunslinger would do.