Thanks to Nikki for this great story of her Couch to 5k experience, complete with Daleks … 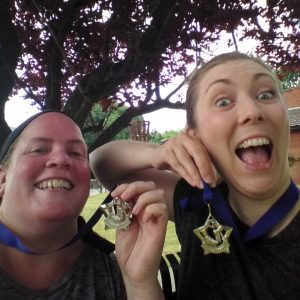 I’ve never been a sporty person. I did everything I could to avoid PE at school. For example, I learnt quickly that if I (or my tennis partner) managed to hit the tennis ball over the fence of the playground, we could sit and chat until the teacher returned it; and you’d be more likely to find me sitting in a bush, than running during the cross country lessons. But, I did develop a love of walking, as I got older, and it was whilst I was training to walk the 50km Thames Path Challenge last year, that I began to look at running in a different light.

One Saturday night, whilst I was watching the Doctor and his assistant do battle with the Daleks I realised that if I wanted to be the Doctor’s assistant, I would quickly be dead the moment s/he shouted “RUN!” and pegged it away, whilst I lay in a huffing and puffing heap on the floor. Definitely not what the Doctor ordered.

Whilst we’d been training for the walk, we’d bumped into the Waverley Harriers running along the river. They were always friendly and when the opportunity to take part in the Waverley Harriers Couch to 5k scheme arose, I jumped at the chance. I felt enthusiastic and motivated to take part – until I arrived for the first session and I found myself surrounded by runners. Suddenly, I was overwhelmed by shyness. I also found myself wondering why all these people needed to learn to run – they looked like they’d be able to run just fine and I felt way out of my depth. Things became clearer when they all disappeared and I was left standing with a group who looked like they were feeling just as out of depth as I was. Turns out we needn’t have worried. We were in safe, friendly hands and we soon found ourselves finishing the session. As we wandered home, talking about how excited we were to begin this running journey, several Waverley Harriers ran passed us shouting, “Well done!” We were thrilled to have that kind of support after our first session.

I’d be lying if I said that I’d found Couch to 5k easy. I think the next few sessions were rainy and then after that we had some very warm evenings to contend with (I definitely preferred the rainy evenings). I think I asked every single running volunteer, “When does this become fun?” throughout the sessions. On reflection, I can say now that it was fun (I definitely was not thinking it was fun whilst I was doing it though!). Our little group were so supportive of each other and the run leaders and volunteers were fantastic. We were listened to and sessions were tailored to fit around each of us, in a way that benefited all of us. We were never preached at or made to feel like we should do something we weren’t ready to do. We were supported, motivated and given some excellent pieces of advice. I learnt so much and my confidence grew.

Our graduation was at Cranleigh Parkrun. I was lucky enough to have Amy running alongside me as we alternated between running and walking my first ever 5km. When I reached the end (at the back as always) I was surrounded by Waverley Harriers, who kept me running and then pushed me to sprint to the finish line as all my fellow Couch to 5kers cheered me on. What a fantastic feeling! In that moment, I knew I wanted to carry on being a runner and I wanted to sign up to become a Waverley Harrier (if they’d let me). Luckily, they did.

Now, I’m very happy pottering along at track nights. I love the tips and tricks we learn, I love trundling around the track with my own thoughts and the occasional words of encouragement from fellow runners. I never look forward to it, but I always feel fantastic afterwards, not just because of the running, but also because of how welcome we’re all made to feel. It even turned out that I wasn’t alone in my lack of sportiness earlier in life. Other runners in the club had been exactly the same as me.

It’s a thrill for me to be a part of a running club. I didn’t think that someone like me who never really did PE would or could join one. But, the Waverley Harriers made it possible. And who knows? I might now become the Doctor’s new assistant – or even the Doctor herself. Until then, I’ll keep running with the Harriers, keeping one ear open for the familiar whooshing sound of the TARDIS in the distance…