I’m Nikki and I’m still on the (seemingly) never ending path of training for my first marathon. To help with this (seemingly) enormous task, I’m speaking to as many WH members who’ve run a marathon as I can, in a bid to pick up tips and tricks to get me through the training and the big day itself.

This week, it’s Annette Lee, and I was particularly keen to learn about motivation this week. Some week’s it feels super hard to get myself off of the sofa, into my trainers and out of the door. This is something I asked Annette about it and she’s got some great tips. This week, I’m going to be looking for some nice treats and experiences to reward myself for getting out the door, whatever the weather, so I’m feeling ready for the start line.

Annette has had a mixed experience with marathons, which I’ve really enjoyed reading about. So, over to Annette and her first ever marathon experience.

1. Why did you enter your first marathon?
The year before, Gary had run his first marathon and had signed up again for the following year. I was making a bit of a comeback fitness wise, having been knocked back by poor mental health. It felt like a big enough challenge and one that would prove to myself that I was ‘better’ and that I had beaten it. More importantly, it would mean I could share the training and the experience with my best friend.

2. Where and when was your first marathon?
Brighton 2016 was the first start line I toed – but I didn’t finish that one, so we will say that Brighton 2017 was my first complete marathon. 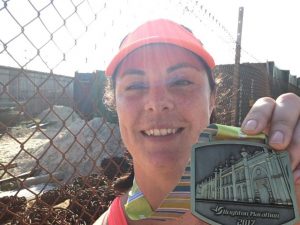 3. What was the most valuable thing that you learnt whilst training for your first marathon?
Pace and time are all very well to train to, but it can still go wrong (and be out of your control) on the day. Be sure to plan for the things you CAN control.

4. What did you learn while running your first marathon that no one had ever told you before?
There is such a great sense of solidarity between marathon runners on the day, that I’ve never experienced in other races. This is one of the keys things that WILL get you through the day, when all your own mental strength is starting to wane, you will be picked up by a random stranger and you will find it again.

Also, not to rely on the event’s water stations. This was originally my plan (to carry my own water), but in the week leading up to the race, when the forecast started reaching 25C+, I decided to ditch carrying my own water as I thought I would get too hot. I didn’t anticipate water stations being empty when I reached them on the day, so my race became more a survival test than anything else.

5. What did you do immediately after your first marathon and the next day?
You will really want to eat ALL the food, but you may find it very hard to stuff your face as much as you want. Do not underestimate the power of a packet of salt and vinegar crisps and some cheese and pickle sandwiches waiting for you at the finish line. If you’re fuelling with gels, you will be absolutely sick to death of gels and sweets, have something relatively plain and savoury.

The next day I find it best to keep moving. I make sure I get out for a walk or go to work so I’m distracted from the soreness and keep moving around during the day. And when you find your appetite again, treat yourself to something really tasty.

6. How many times have you run a marathon since?
I’ve trained for another one, in the hope to break the curse … but got injured … AGAIN!!! So, I currently have a 1 in 3 hit rate. My body is apparently not built for marathons.

7. During later marathons, what have you learned that you wish you’d known for your first marathon?
Don’t put so much pressure on yourself. Just finishing a marathon is a massive achievement as there are a fair few points where things can go wrong and are out of your hands. Do what you can and be proud of yourself for that. Times can be tackled later (maybe).

8. What was your favourite marathon you’ve ever run and why?
Since I’ve only finished one, the obvious answer would be Brighton, but I wouldn’t necessarily say I enjoyed it enough to be classed as my favourite. If I ever get the chance to run London, that will definitely be my favourite as it is all I need to achieve the London Classics medal (the swim, bike and run of London).

9. What tips do you have for remaining comfortable during the race?
I can sometimes get myself a little anxious and overwhelmed in large crowds and by the scale of the challenge I’m about to take on and worry about what pace I want too early. I’ve used this in half marathons before, but I imagine it should translate to a full. Don’t worry about the pace each km or mile for the first half of the race. Have a rough aim of what you’d like to be at halfway and run to comfort, and then think about how you’d like to finish your race, once you know where you are, and what’s achievable based on your first half’s performance.

I find a solid breakfast anything under 2 hrs before the start will not sit comfortably in the first few kms. So, I’ve switched to liquid (smoothies and similar) unless I have enough time to have a decent digestion time. And never underestimate the power of a banana in the starting pens.
Nutrition wise, I aim for gels at about the 40-45mins running mark. Any longer and you risking dipping into your reserves too early, and you’ll pay for that later when it’ll hurt a lot more.
I swear by tiger balm on the sore joints afterwards, and you can never put too much Vaseline on and in between your toes before the race.

As you get into the later stages of the race and you’re starting to struggle, use each distance marker to have a quick check over on how you’re doing, and how well you’ve done so far. And focus on your form, lift yourself straighter/taller, pump those arms a little more to inject a bit of pace, keep knees and ankles in line with your hips etc. Form drifts when you’re tired and will highlight any weaker spots. Stay strong, even if you’re faking it!

10. What tips do you have for overcoming the wall?
Take on fuel 5-10 minutes before you think you need it. Once you start feeling like you need to eat something you’re already fighting that losing battle. Have a strategy for what you will do if you find the wall, so that if and when you do find it, you have a plan.

11. How do you maintain motivation during training for a marathon?
A marathon is a massive challenge and should absolutely be respected, but if you want to avoid a horrible low and lack of purpose afterwards, have something else planned. But give yourself a rest week or two, and then get started on the next challenge. Having another thing to look forward to would have been especially helpful when I didn’t manage to complete my first marathon.

During training, I put an amount of money into a pot each time I get out on a run and/or other sessions. Once the challenge is over, I spend that money on something specific to remind me of the challenge. I bought a charm bracelet with a running shoe and lighthouse for when i finally finished Brighton. And had a luxury Easter egg waiting for me too! If you’ve sacrificed some treats during training, be sure to have something to look forward to after to make it all worth it. (I recommend the Hotel Chocolat Ostrich eggs – not cheap but wow I savoured every mouthful!)

12. Is there anything else you’d like to share about marathon running, that hasn’t been asked here?
You may feel as though your hips need replacing for a few days afterwards, they WILL feel ok again eventually.

13. Who’s been a big help to you whilst you’ve been marathon training?
I think it would have to be Mr Lee. He kicks my butt out the door when he knows I should be doing something, and he often joins me on the really long runs at the weekends, which makes them slightly more bearable and more of an adventure than training. He also doesn’t mind my post long run slob-time on the sofa as he is sitting on the other side doing exactly the same.