Yet again things are starting to open up again and we can run in small groups for a little while. Whilst there’s been no races, running with the club has been a life line for many of us. It’s been a year since Marathon Monthly/Monday began. Each month I learn a little more, but I know I haven’t even scratched the surface of the marathon running experience in this club. So, if you have run a marathon and you’d be willing to share your experiences with all of us. Get in touch.

This month our runner is Paul Sansom. Paul’s offered me some great advice over the last year. One tip he suggested was that squeezing gels into a soft bottle, with a little water, made them easier to sip and stopped the hassle of fiddling with trying to run and rip open the packets (top tip!) – he ran his first marathon in 2012, so over to him to learn all about his experiences. 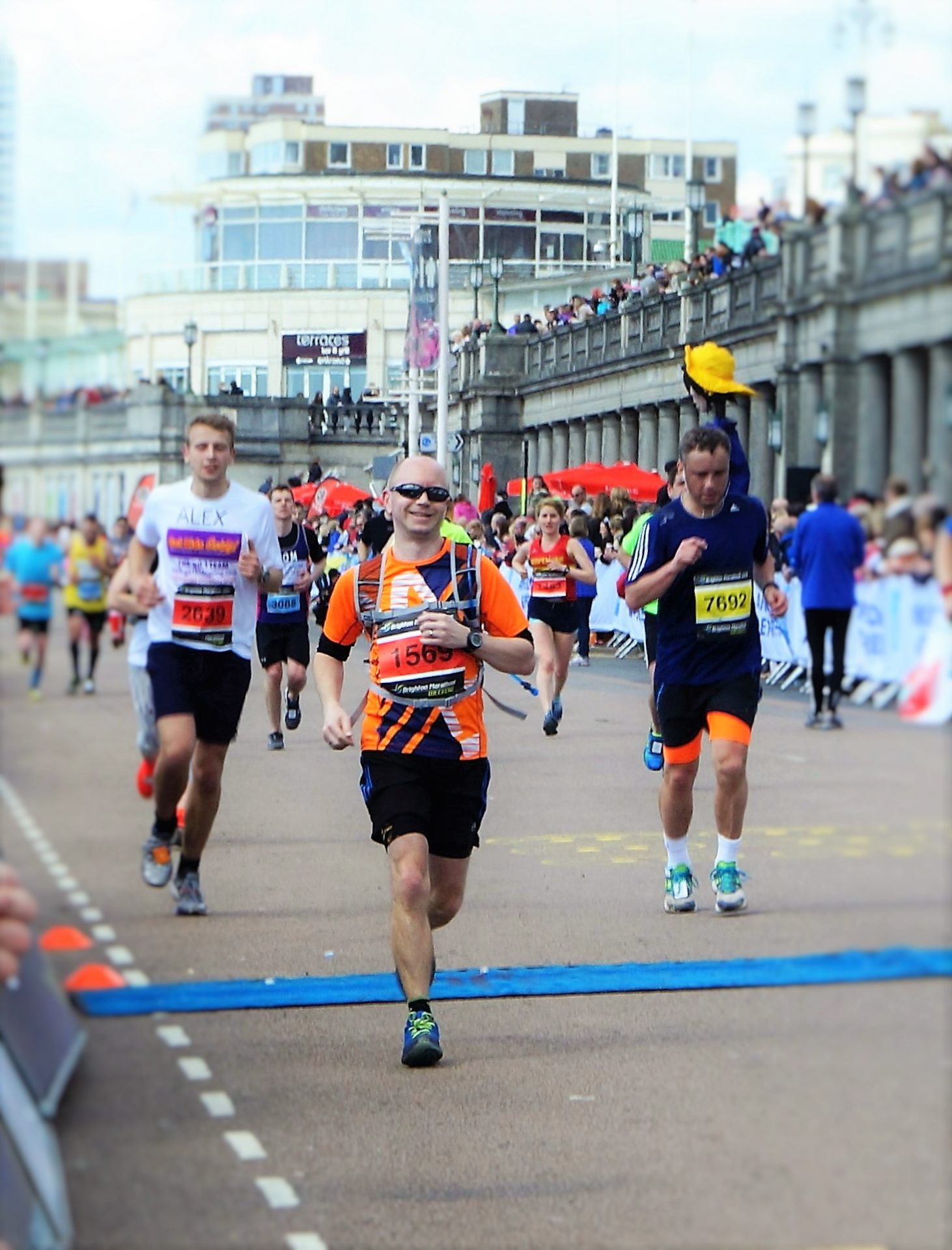 I used to swim for fitness but my local pool closed to be refurbished so a friend of mine at work persuaded me to go for a run with him. I was quickly hooked and after doing the Reading Half and Great South the following year, I started to wonder if I could run a marathon. With my 40th birthday approaching I thought I’d better get on with it, much to the amusement of my friend.

I got a charity place for the London Marathon in 2012. It was exciting being our Olympic year and the buzz around athletics helped motivate me to go for it.

So many things. Getting a charity place puts a lot of pressure on you to raise money and is time consuming on top of your training. If you want to run fast you need to do a lot more training. A calm head is needed when planning hydration and nutrition for the race, I drank too much too early.

Be prepared for people to be shouting your name and encouraging you even when you want to curl up in a ball and die! It’s pretty horrific when your mind and body are shutting down.

Lay on a floor for an hour, slightly weepy but happy to be alive. Hobbled around and went downstairs backwards. Declared that was my first and last marathon.

Two road marathons in Brighton, the Pilgrim Marathon, the Godalming Round twice and two Waverley Harrier Ultras. So clearly, I have a short memory.

Expect highs and lows, you’ll get through them. When you are running out of energy you probably need a drink of water. When it comes to food and water start early and have little and often. Salt helps you absorb water so don’t just concentrate on the sweet stuff.

What was the favourite marathon you’ve ever run and why?

Probably my first Brighton Marathon. I didn’t have huge expectations on time, just wanted to go below 4 hours. I’d trained 6 days a week for 18 weeks so felt amazing physically and knew I had enough fluids and sugars with me. The best part for me was completing 26.2 miles non-stop, even the empty, soulless power station area didn’t stop me.

Actually, pretty much the usual stuff. Plenty of carbs in the days before with a good pasta meal on the night before. Keep drinking, small and often. You’ll need extra carbs so gels or an energy drink are important but don’t go mad. And if you find you feel a bit sick, it’s probably not the sweets, it’s the lack of salt so have some salt tabs with you (thanks Kat!).

If you want to run fast, then you need a plan. Find a training approach that suits you, I certainly recommend back-to-back long runs to build strength and stamina (thanks Andy G). And plan race day, I used a heart rate / pace approach for my second Brighton which worked pretty well (thanks Mark R), though I got a bit dehydrated and couldn’t sustain it exactly.

What tips do you have for remaining comfortable during the race?

I’ve mentioned nutrition above but I would also say carry as little as possible and use a decent running belt for anything you do need to take. I put my gels and a little water into a couple of small soft flasks, much less mess and easier to take. And don’t over dress, you will get warm!

Any tips for maintaining motivation during training?

Training can be quite lonely, especially if you’re working on specific paces, but do try and run with someone else when you can. Keep in touch with what other runners are doing through Strava, it shows you aren’t alone! But also embrace those cold, dark evenings, completing a training run is a motivation in itself and you are building the mental strength and character for the race. After all, there may be 30,000 runners with you but it’s your body and mind which will get you to the finish.

Lots of people in the club with all sorts of advice and ideas. I’ve mentioned a few above but also Dave for loads of runs together, Harriet and Philly as track buddies and the C25K crews each year, seeing those guys putting in the hard yards at track is very inspiring.

And of course, Gill, my wife, for putting up with being me out of the house so much, eating late, trailing mud around and constantly washing Runderwear. Just don’t mention all the pairs of shoes…