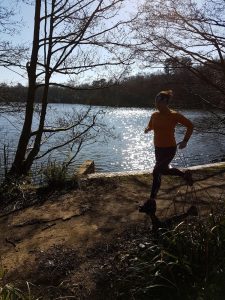 Apart from a brief stint of sprinting at school, I didn’t ‘take up’ running until I’d bought my first flat when I was 21. Living alone miles away from civilisation and friends brought some challenges in terms of keeping myself occupied. So, I signed up for the Great South Run because 10 miles sounded like a fairly impressive first challenge to me at the time.

I’m not sure there is one reason, and it can change depending on various factors. More recently it’s been to keep my mental well-being under better control. I can head out for a run with so many thoughts churning through my head all at once, and then somehow, through the magic of just being outdoors and the simplicity of ‘one foot in front of the other’ these thoughts have all been sorted out into a much better order and I wonder what I was getting so worked up about. It’s like some kind of personal assistant has just blitzed their way through my mind and it feels so much better, and life can just carry on.

Great South Run is an important event for me, as it’s the first race I ever signed up for back in 2001. I’ve returned to it about 15 times, although I’ve genuinely lost count now. It’s rained, it’s been glorious sunshine, I’ve raced alone, I’ve run with others, some years I couldn’t even bring myself to enter it as I was in a dark place and didn’t have any belief in myself that I could do it that year. Doing it last year with so many new friends from the club was particularly special, and my fastest time for over 10 years. It felt as though I’d finally closed the door on a difficult period of my life. An overwhelmingly awesome feeling!

I’ve thought long and hard about this and I don’t think there’s really one person I look up to especially. If I HAD to pick someone, I’m in awe of GB triathletes like Vicky Holland, Jodie Stimpson and of course Alistair and Jonny Brownlee. They’ve all had some difficult times, but they come out fighting and get to represent their country in a sport that they love. Watching these guys and gals run is a truly incredible sight, and just proves that no one is invincible.

I would love to be fit enough to complete the Everest marathon. I’m slightly obsessed with mountains, and none more so than the Himalayas, since my trip to Everest Base camp in 2007. This would be an amazing way to combine two of my favourite things. It would be unbelievably tough though, that’s what would make it so amazing if I ever did it.

Don’t compare yourself to each other. Each of us laces up with a different background, mindset, level of health, stresses etc. You also never know if that person you pass is warming up, cooling down or training for an event that’s completely different to you. Just concentrate on yourself and how you’re doing against your own personal goals, whatever they may be.

A couple of half marathons just for the bling (Madrid & Liverpool)

Being chased by a car in Munich (Wings for Life)

A couple of sprint distance triathlons

A two day ultra (Race to the King)