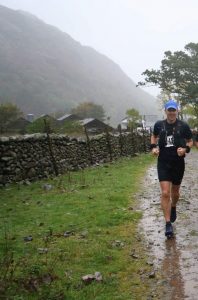 When did running begin for you?
My Dad used to take me out when I was a young lad (probably 6 or 7 I’d guess). We used to do a route around the hills of Bingley, West Yorkshire known as the 20s. As the name would imply you were supposed to complete it in under 20mins. It wasn’t until very recently that I was able to duck under the 20…to be fair there are some very steep hills involved.

Why do you run?
The main reason I suppose is that I enjoy it (most of the time). There are the obvious health and fitness benefits but aside from that, there’s something I really like about social – group running that you just don’t get from slogging around by yourself. Through joining the club I’ve meet so many great folks and it definitely makes you feel part of a wider community. I’d recommend it to anyone.

What race or moment in your running career holds the most significance and why?
There’s been a few to choose from over the last year or two…running my first ever marathon with Ben Smith (the 401 marathon challenge chap) and fellow harriers was one! Doing the Four passes race in the Lake District, again with harriers, was both incredible and horrific. But you can’t beat the good old Sunday morning club run in my opinion. Every run’s a winner!

Who is your running inspiration?
I’d have to say Joss Naylor, a total legend of the fell running scene. I also enjoy following running Youtubers such as Sage Canaday, Jamil Coury and Ethan Newberry.

What event, past or present, would you like to take part in and why?
I’d love to have a crack at the Three Peaks Race up in Yorkshire one day. It’s just one of those races that I always heard tell of when growing up – the stuff of legends. Although in all probability I may just stick to flat park runs!

What golden piece of advice would you give to other runners?
Always triple tie your shoe laces when doing a winter cross country race.

What’s next?
The inaugural running of the ‘Godalming Round’, a 26 mile trail run up every local hill we could find, which we’ll hopefully be doing this May.

Who would you like to nominate?
It’s got to be Jesper Lidstrom, who’s just successfully completed the 100 Km Highland fling Ultra!