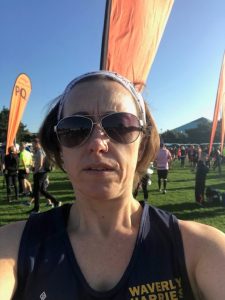 When did running begin for you?
I actually ran my first 10K when I was 16 (so a fair few years ago!) – when I ran the Dublin women’s mini-marathon and only entered to stop my mother from hassling me! I hated the training, I hated the race, I hated the crowds and when I crossed the finish line, I swore that would be my first and last ever race!

Fast forward a few years and my running began properly in 2013 when I downloaded a running app – I guess a precursor to the current Couch-to-5K apps which are so prevalent nowadays. I wasn’t making the gym as much as I used to, two small children under the age of 5 put pay to that and I desperately missed the buzz (and freedom!) I used to get from the gym, and I figured this was a good way to get to started as there were less time constraints involved. All I needed was a pair of runners right???

I signed up to my 2nd 10K – the first London Winter race in 2015 and my target was to run it in under an hour – which I did. I guess I knew I was hooked on running when my runners, running belt and kit were the first items packed when going on holiday! Apart from skiing holidays, I always run when I’m away – I love the experience of running in other countries.

Why do I run?
Having just completed my teacher training at the end of June, I can honestly say that running is the activity that helped me survive and kept me going when the pressure was on. It was my sacrosanct, my one activity (other than the pub – which I also sometimes had to skip!) that kept my mind and body in good physical shape. It was my go-to thing to do when I needed to clear my head and refresh my mind. It’s amazing what you can achieve mentally with a quick or sometimes not so quick run!! I basically love it!

What race or moment in your running career holds the most significance and why?
I think it has to be, the Brighton Marathon of 2018. Having had a torrid time from miles 18-23 in my first marathon in 2017, I was determined to learn from my mistakes and improve on my time, however a badly bruised ankle 6 weeks before the race, my determination and focus changed to just being able to complete it as that was not guaranteed given the extent of damage to my ankle. Up until then, my training was disciplined, I knew what I needed to do and what I’d learnt from the previous race. I was on target to improve my time and I’d only one long run to go – what could possibly go wrong??!!!

Who is my running inspiration?
Honestly it has to be, my Mum. She is the most dedicated and determined woman I know in all aspects of her life. She’s been running since forever and still runs regularly at 68 something I hope to be able to emulate!! She wanted to run a marathon before she was 40 and not only did she do that, she was placed 1st in her age category in the Belfast marathon – not bad when you’re a full-time Mum of four!

What event, past or present, would you like to take part in and why?
I’d love to take part in the Dublin Marathon – my home-town race. Sadly, as it takes place on the October bank holiday weekend (that the UK doesn’t have ☹) it’s not looking likely I’ll be running it any time soon. Who knows though eh, it’s not impossible.

What golden piece of advice would you give to other runners?
Know your limits and don’t over train. If training for something and you get injured follow the advice given or you might end up on the recovery side-lines for longer.

What’s next?
I have unfinished marathon business, so I’ll definitely do another one – just not sure which one or when. I’d like to do London too at some point but preferably a ballot or club place not a charity one with financial commitments.