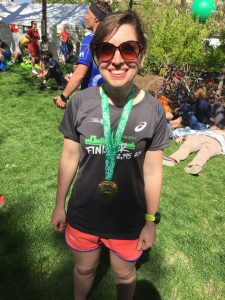 At university, I used to go out with a couple of friends round a local park in Leeds. None of us particularly wanted to run and it’d be a real struggle to get ourselves out of the door. Looking back, I’d be surprised if we actually ran more than a few hundred metres at a time, but we did feel a sense of achievement at managing that. After university I dabbled with a couple of 10ks and a sprint triathlon (encouraged and supported by my neighbour, who even sold me her bike at a very knock down price!) but I still wasn’t that taken with it. It wasn’t until I moved to Bristol and met my now husband that I really got into it.

Now I run because I can’t imagine not running. I find it’s a great way to explore, it helps me relax and it feeds my competitive nature.

Running the London Marathon in 2015. By that time I had done a fair bit of running and quite a few races including a couple of marathons. I hadn’t run a marathon in a time I was particularly happy with, having always struggled with taking on fuel and running out of energy (and, probably, not training enough!). Running London was a big deal – I had a place through the Ealing Eagles and I felt the pressure to do well knowing that lots of people were watching to see how I got on. I had two goals: (1) completing the whole race without walking and (2) finishing in under 4 hours. I managed them both. I found the whole experience very emotional and quite overwhelming if truth be told. Having achieved the time I wanted, I said that I would never run a marathon again. That didn’t last long!

Anyone who puts on their running shoes and gets out the door is an inspiration. Running is hard when you’re actually doing it but motivating yourself to do it in the first place is even harder. Over the past few months I have found that I don’t struggle to get out there (maybe I have become slightly addicted?!) but I can’t count the number of times in the past when I’ve really just wanted to sit on the sofa with a cup of tea rather than go for a run.

I would love to have run the Boston Marathon with Kathrine Switzer in 1967. At that time women weren’t allowed to compete. She entered as “K V Switzer” and she wasn’t noticed until a few miles in. Officials tried to pull her off the course but she resisted and finished the race.

I’ll be back at the London Marathon in April. I’ve set myself an ambitious target – let’s hope I can achieve it!