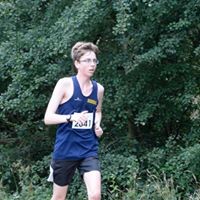 When did running begin for you?
I was a very active child and played a variety of sports but never did any running until I represented my secondary school at cross-country and enjoyed it. Soon enough, I found out there was a parkrun in Guildford, started running 5k’s regularly and haven’t looked back since.

Why do you run?
I like the challenge of improving myself as a runner but also meeting other runners and socialising with them.

What club activities/event will we likely see you at (e.g. track, Thursdays, cross country etc.)?
Regular at track and Thursday runs along with the occasional cross-country.

How long have you been with the club?
Since 2016

What race or moment in your running career holds the most significance and why?
Fleet 10k 2015. It was my first 10k event and there was a decent crowd around the course that were cheering me on giving me the opportunity to relax and enjoy the event rather than get worried about my pace dropping in the latter half.

Who is your running inspiration?
Anyone who gets out running is an inspiration, whether that is an elite runner or someone who’s running for the first time.

What event, past or present, would you like to take part in and why?
Would love to participate in Wings for Life one day because of the unique concept of being hunted down by a catcher car.

What golden piece of advice would you give to other runners?
Look at profile maps before any event. It allows an opportunity to find the trickiest parts of the course are as well as formulate an efficient pacing strategy.

What’s next?
Not a whole lot now that the Clandon Park Run 10k is postponed. Hopefully will do a half marathon later in the year.