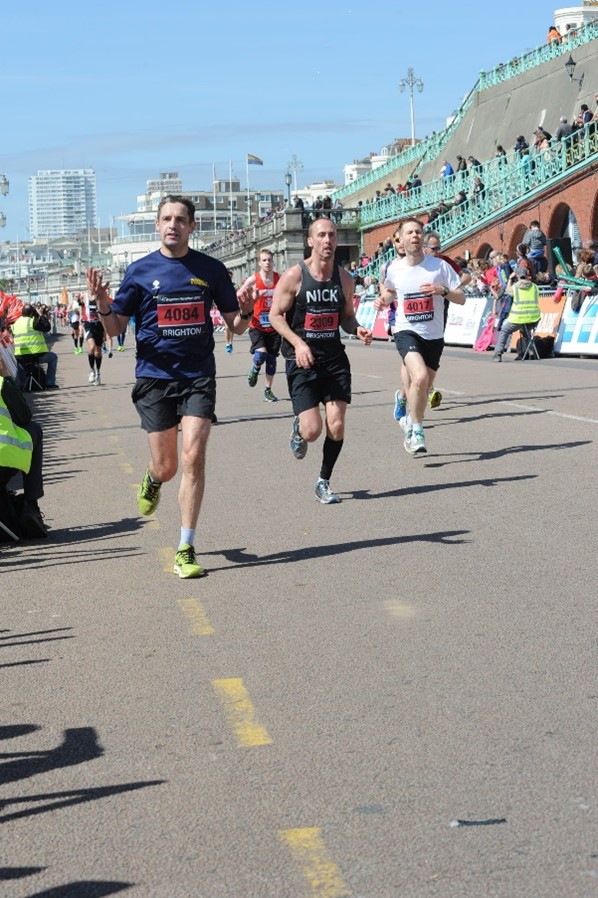 When did running begin for you?
I have always enjoyed running, but it started properly for me back in 2007 when I was travelling with my job. I decided I’d go to the gym and run on the treadmill and I started to increase the distance and pace and then ventured outside and realised it was a great way to explore the places you were working in. Then in 2009 I started entering events and started with the Great South run and the Run to the Beat Half marathon.

Why do you run?
I have run for a number of different reasons over the years. To start off with it was to get physically fit. I am a competitive person, so it progressed to wanting to get better and better and go further. My goal was always to go under 3 hours 30 mins for the marathon and after a few cracks at it I finally did it at Brighton in 2015, and I have managed to improve my times from there. I have now moved on and especially in the last year I have run for my mental health as well as my physical health and for me particularly during lockdown the mental health aspect of running has become event more important. I also realised I am quite a simple person and a bit like a dog, as long as I get let out daily for a run, I am quite happy 😊.

What club activities/event will we likely see you at? (e.g., track, Thursdays, cross country etc)
When I joined the club, it was a lot smaller and so the variety of sessions wasn’t as big. I used to join Steve’s Sunday runs to start off with all the time, but my own personal preference is always to head out earlier and so I did this with some others and over the years we have done lots of Sunday marathon sessions. I love track, and miss those sessions, so I’d be back to those, and I have done cross country a few years ago for the club, but honestly, I prefer the road and track and a gentle off road across the commons sometimes.

How long have you been with the club?
I joined back in 2009 as I wanted to meet other local runners who could help me improve. It’s amazing to see how the club has grown and evolved and its great to see so many new members.

What race or moment in your running career holds the most significance and why?
There have been a few really, on the competitive side Brighton 2015 and getting under 3 hours 30 stands out as that was a running ambition.

2012 I helped organise and took part in the Relay GB which was a nonstop relay running round the whole of the UK. I got other running clubs involved and got on the organisation team and then also did 2 overnight relay legs running around 29 miles each time, once between Rye and Eastbourne and once between Ipswich and Colchester. Running through Hastings at 2.30am whilst people were leaving nightclubs, they all thought I was mad (They were probably right too)

2019 and the New York Marathon, that was a lifelong ambition achieved for sure and a memory I will never forget. Standing on the start line and running over the Verrazano bridge as New York, New York was being played and then looking and seeing the skyline felt quite emotional. 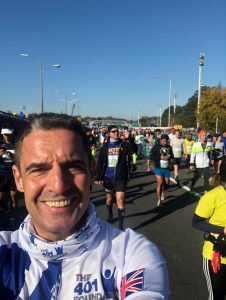 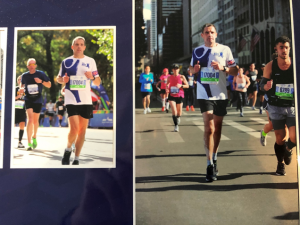 Who is your running inspiration?
I am just amazed at what other runners do and take inspiration from everyone who gets out there regularly and runs really. I’d love to be able to run faster so am inspired by the really quick runners in the club (James Williamson, Dan Hull, John McKenna, Sam Allwood, Mark Rowland, Andy Goodridge etc.)

I am also inspired by people who take on crazy challenges such as Ben Smith when he attempted his 401 marathons in 401 days. I was proud that Waverley Harriers supported this and have remained a big supporter of the foundation ever since raising money for them for the past few years and tackling bullying and mental health problems.

What event, past or present, would you like to take part in and why?
I always said that I wanted to run a marathon abroad. I have now done New York and that was amazing, so really, I’d love to do another of the marathon majors. Chicago was next on my list before COVID kicked in!!

What golden piece of advice would you give to other runners?
My running mantra has always been “Go Strong OR go home”.  You don’t have to be the best or the fastest, but whatever you do give it 100% and push yourself as you never know what you can achieve.

What’s next?
Great question, if only any of us knew that!! Up till last year I’d always done a Spring marathon every year and loved the training routine as much as the event. Currently I am entered into the Manchester marathon in October, but we will see. Until then I just keep taking part in virtual challenges……did I say I love a challenge?!!