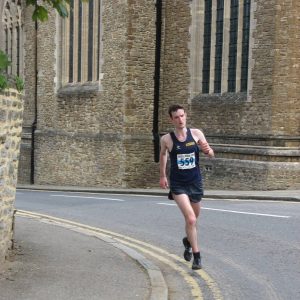 I’m a run leader (most often at track on Tuesdays) and also the WHRC Leaders & Training Co-Ordinator (we never did work out a snappier title).

What does that involve?

Making sure we have adequate numbers of leaders to cover our weekly sessions, keeping an eye on the training rota, encouraging new people to try their hand at leading, and generally providing ideas and assistance. I also represent our run leaders at committee meetings and suchlike.

As a run leader, I mostly just tell people to run around in circles and occasionally blow a whistle at them.

I played football quite a lot as a child/teenager and used to do a few short runs during the off-season to try to stay fit. By my late teens it dawned on me that I was enjoying the running more than the football, then I ended up joining an Orienteering and Fell-Running Club at university and it sort of spiralled into being “a proper thing” from there.

Aside from the usual obvious exercise benefits, I like that it gives you a chance/an excuse to go exploring; I much prefer running off-road given the choice.

What club activities/events will we likely see you at (e.g. track, Thursdays, cross country etc.)?

I’m a regular at track (both leading and running), do Thursday night runs roughly every other week or so, and try to get along to most of our cross country races.

How long have you been with the club?

The first ‘proper’ race I did was the Hartcliff Hill Fell Race in 2009. I must’ve finished at least halfway down the field but somehow still managed to win a cake. I think I still subconsciously assume that if I keep running then someone will randomly reward me with baked goods again (fortunately, this is occasionally true).

Everyone in general, nobody in particular.

I don’t tend to focus on ‘running events’ all that much to be honest. I often find the runs I most enjoy aren’t necessarily the ones I expect when I set out. That said, I’ll go for the Lord Wandsworth XC race that’s just gone, partly ‘cos it’s a fun course but mainly as if I’d been able to run it then that implies I wouldn’t have been ill for the whole festive period…

Double-check your shoelaces before you head out – there’s a faint scar on the bridge of my nose to attest to that!

Not a whole lot; will likely get along to our remaining xc fixtures, the occasional parkrun, and maybe a handful of low-key local races, such as the Elstead “Marathon”.