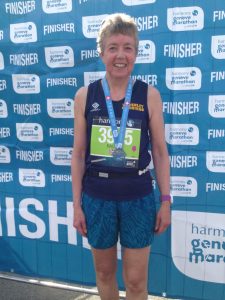 In 1984 a friend from work suggested doing a half marathon through the Army land in Aldershot, I ran at School, but hadn’t since, I thought I was going to have a heart attack, but got hooked after I recovered and never looked back.

I love the social side of running with friends in the great outdoors, feeling energised, also a great stress reliever.

Florence Marathon, the most disorganised race ever, the night before you wouldn’t think a race was happening, nothing was set up. As we arrived at the start of the race they were putting up the Start Gantry, the race started an hour late, we zig zagged in and out of locals doing their shopping crossing the road right in front of you, oblivious to the runners in front of them, but I got a PB, first time I got under 4 hrs 30.

Penny Elliott, such an inspiration to all, ran her fastest marathon at age 69 in 3 hrs 47 mins, always helpful to all, new or established runners.

I’ve been very lucky to have travelled round the world running races with friends, doing the races I’ve always wanted too.

Join a club, its so much nicer to run as part of a team and much easier to go out the door when your mind is saying go for it, but your body is saying, no, go back to bed.