“Paris is always a good idea”

…for a marathon. Ok sorry Audrey, I added that last bit on, but it’s so true. For my first marathon I was advised to make it a good one, and Paris delivered in every respect. 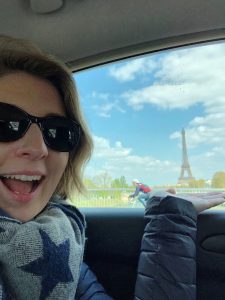 We arrived in Paris on Saturday morning after almost missing the Eurostar ( this became a bit of a theme for the weekend), but luckily we were ushered through security and passport control and actually ended up feeling like a VIP! After arriving in Paris and having a leisurely lunch we made our way to the expo to pick up our numbers. My friend had decided that the medical certificate he used for working on yachts would suffice. Unfortunately, this certificate neglected to have the word “running” on it and therefore did not tick the requisite box and it was rejected. With less than two hours until the expo closed he rushed to a printing shop in Paris and doctored my already-extremely-doctored medical certificate. He got back to the expo with half an hour to spare and luckily it sufficed – phew! 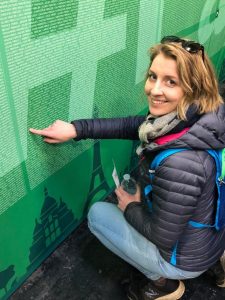 (Obligatory photo of me finding my name on the wall)

I woke bright and early on Sunday morning with the expected pre-marathon nerves. After yesterday I was determined not to be late to the marathon so we got an Uber to the start line giving ourselves loads of time as we expected it to be really busy. Instead though we got there in super-quick time and were in our pen on the Champs Élysée with an hour to spare. This for me was one of the best parts of the whole day. It was a lovely crisp spring morning with clear blue sky, music was playing, the Arc de Triomphe was behind me and thousands of runners were lined up in front of me. Most importantly, no queue for the portaloo! Weirdly I didn’t feel hugely nervous compared to other races I have done in the past and instead was just absolutely buzzing to get going. Eventually it was time to start and we slowly edged our way past piles of clothes to the start line.

Then I was off down the cobbled streets towards the Place de la Concorde. I had all the voices of people saying “hold back” “don’t go off too fast” in my head so spent a lot of time looking at my watch to make sure I did just that. The first 10km passed quickly, with my average pace a few seconds quicker than planned, and before I knew it I had the first glimpse of my support crew and their amazing signs and t-shirts, which gave me such a boost. 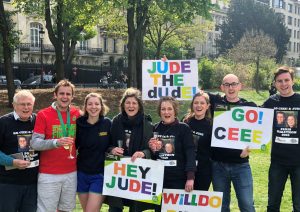 The next landmark I remember was the stunning Chateau of Vincennes, there was an aid station here but in my bid to be self-sufficient I was carrying everything I needed on me so I was able to keep to the side and take it all in.

As I neared the halfway mark I definitely started to feel it, I started to lock onto a green line on the road, which I think marked the marathon racing line. It gave me something to focus on helped get me through to seeing my support crew again. I started to struggle mentally a bit at this point, when I realised I’d already run nearly a kilometre more than the markers were telling me. 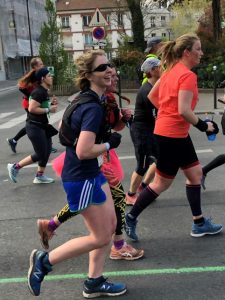 (Still able to crack a smile so this must have been taken pretty early on!)

The next section was along the Seine which included some lengthy tunnel sections. It was cool to be in the tunnel with loads of other runners, but actually quite warm and made me appreciate the perfect running conditions I had on the day. I was starting to tire a lot now and then a couple of ‘hills’ came in. Really gentle inclines on any other day, but felt so hard as I passed into distance that I had never experienced before. Loads of people started walking around me and I hadn’t anticipated the psychological effect this would have on me in making me think this was ok. I stopped briefly, stretched, and walked a little; everything hurt just as much walking as it did running so I decided I may as well run. So I carried on, about a minute slower than my planned pace, but overtaking walkers and using parkrun distance as a benchmark to keep me going.

The last km went so quickly and before I knew it I was at the 500m sign then at the home straight with all the crowds around me, crossing the finish line 43.24km and 4 hours 51 minutes later, and just glad to have made it round. Walking down to collect my T-shirt and (slightly mediocre) medal was so painful and it took me a good fifteen minutes to actually feel happy about what I had just achieved.

The marathon was absolutely fantastic, but the best bit was the support I felt from everyone. Despite people running marathons and more all the time, this club doesn’t lose its appreciation of what an undertaking and achievement it is for first timers, and it was so nice to receive so many well wishes.

So my advice to anyone embarking on their first marathon, go for it and why not make it a memorable location while you’re at it!? 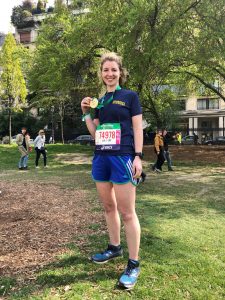