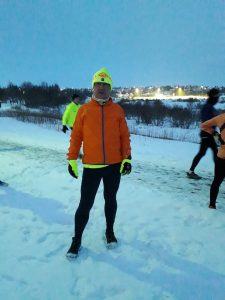 Vetrarhlaup is Icelandic for Winter Run and the Powerade Vetrarhlaupid is a series of Thursday night 10k races run every month from October to March. The races take place whatever the weather conditions.

Heather & I are regular travellers and often try to combine our tourism with a running event. Iceland had long been on our bucket list as we wanted to experience the Northern Lights, and so, with a little research, I discovered the Vetrarhlaup.

The race starts at the Arbaejarlaug thermal baths, a 30 minute bus ride from downtown Reykjavik and we visited there on the afternoon before the race so that it would be more easy to find our way there later on. We were delighted to discover that the baths are free for ‘Oldies’ and it was a great experience relaxing in one of the many outdoor hot pools (ranging from 38° to 44°) taking in the snow covered surroundings.

After heading back to the City and taking in a late lunch it was soon time to head off for the race. The format is quite simple : You puchase a ‘ticket’ for around £3 and write your details (name, age, club) on it. You hand the ticket over when you cross the finishing line and they then calculate the times and finishing places.

The course is a 10k lap on paths around the Ellidaardulur Valley, with two bridge crossings over the Ellidaar river. The paths are asphalt, but covered in hard compacted snow. Low intensity lights illuminate the paths, but there are no marshalls and no direction signs… you accept responsibilty for starting and finishing.

The temperature was -1° with some light snow falling as I joined the runners heading for the start. A bit nervous about what to expect and worried about getting lost, I started near the back and planned on running 6 minute kilometers to stay with other runners. A big bang from a starting gun and nearly 300 of us were off. Starting cautiously, being worried about slipping, I found that it was being run single file with any overtaking done on the thicker snow, so it took me a while to find my pace. Crossing the first bridge entailed climbing then descending icy wooden steps and I had to hang on to the handrail to prevent myself falling over.

After the first couple of kilometers, I gained confidence and managed to up the pace a bit and started enjoying the beautiful route alongside the river, even managing to overtake those runners who had started too fast ! The course starts to climb around the 8k mark and many of the runners were reduced to walking. My pace slowed considerably, but I managed to keep running with the lights of the finishing line already visible in the distance. I crossed the line in 61:43, finishing in 224th place.

A really different and enjoyable event and Iceland was great, although those who like a drink will be in for a shock when the see the prices. A tour around the Golden Circle allowed us to see some of the best sights : Pingvellir National Park, Gullfoss Falls and Geysir. We didn’t manage to see the Northern Lights, so a trip to Norway’s Artic Circle has now been added to the list.