The Surrey Half seemed like the perfect half marathon to do for my first 13 mile run. I was told it was flat, well organised and had a good atmosphere. Even better, it was local.

We arrived on Sunday morning to a hubbub of a race village, with long queues for the race number pick up, but not for the toilets (winning) and waited our fellow Harriers arrival. We had a bit of a panic in the bag drop queue, that we wouldn’t make the start, but the queue moved fast and we were soon back out and heading to the start line. As we inched towards the start, I heard someone shouting my name and saw the Harriers cheer squad (aka Annette and Philly) waving and shouting at us, which made me laugh.

We passed the start line and the people cheering were amazing there were photographers along the start and the Mayor, who I waved at, was on a platform. Then, we were out of the railings, up over a little hump and on to the streets of Woking. I knew that the roads were closing, but it was still weird to be running along roads. The wind sounded like there were cars behind us, so I kept looking back. There were people all along the street, shouting and clapping and cheering, which spurred me on. Now, we were moving my nerves had disappeared. I started to think about how far we had to run and nearly gave up on the spot, before deciding to just focus on what was happening right there and then. It wasn’t long before we were passing our first band, a brass band, who I think were playing “Eye of the Tiger” and I started to enjoy the atmosphere. We were near the back, but it amazed me how many people were still out and waiting to cheer us on. Annette and Philly appeared again, cheering us along. 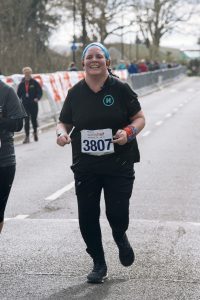 The wind was strong and exhausting. It felt like most of the first part of the run, we were running against the wind and uphill (where was this flat half marathon I’d been promised??). There was a point when I lifted my foot and a gust of wind hit and I felt like I was about to do a Mary Poppins across Woking.

We did spend a lot of the run trying to work out where we were, unfortunately, soon after the 4 mile marker, I realised where we were and became a little demotivated. We were heading for the extremely long A320 road. We quickly realised, not only were we going to have to run all the way along it, but also loop back and run all the way back along it. It felt way too long to run and I felt like it would take too much time and frankly did not want to do it. Music blared from speakers as we approached it, but then we started to spot Harriers! Suddenly, this became a fun game, spotting Harrier t-shirts and shouting “Go Harriers!” at people as they ran by. My mood rose significantly (helped by the wind seeming to disappear) and I plodded on, looking for familiar faces and smiling and shouting. We reached the turning point in no time, and at that point 2 things happened to increase my speed. Firstly, people started yelling my name, but I couldn’t tell who it was, as we drew nearer we realised it was Katie and Nicola cheering us onwards. Then, I noticed the Ukelele band were playing “A little Respect” – one of my favourite songs – and I began singing along and my speed increased and my good mood, increased. This, and the water and portaloo stop, made the return leg of this loop back seem to pass much faster and we were soon heading on to a country road and passing an 8 mile marker. After the A320, the water stations seemed to increase in number, which broke up the running. We were passing some incredible looking houses and some beautiful scenery. There was a steep railway bridge, with a lovely downhill, but I was starting to tire of the hills by this point. None of them were particularly big or steep, but they were enough to slow me down (even more) and tire me out. I was grateful for jelly babies, fruit pastilles and fruit being offered along the route (who doesn’t love free food?). We moved away from houses and into some country roads that didn’t seem to have anyone along them. The rain started then, the rain that wasn’t forecast to happen! With blue skies on one side and dark grey skies on another, we got a smattering of drops. I think that was the point that I really started to swear. I like running in the rain, but I was aware that in the wind we could get cold very quickly. 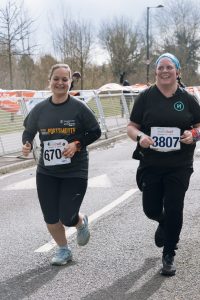 Luckily, the rain vanished quick and the sun returned. It wasn’t long before we heard some music and saw a pub, with a very dedicated band, playing to no one. As we ran by, we enjoyed singing “Don’t look back in anger” along with them. Yet again, the music increased my speed and I had to calm down and get back to a more sustainable pace for me. The music was definitely a much needed mood booster. As we passed 10 miles, we were aware that we had a Parkun left to run. I started to try and pretend that I was running on fresh legs and this was my first 5km of the day. We were in the territory of running further than I’d ever run before in my life and I wasn’t really sure if I’d make it to 13 miles or not. We hit the railway bridge again. Well, we think again, we weren’t really sure where we’d been or if we had seen it before. But I felt like it was too steep to run and walked up that hill, at the top we were rewarded with a lovely downhill run and Nicola and Katie waiting at the bottom to yell and cheer and whoop us on. We were nearing the end now, somewhere between mile 11 and 12. A man ran by telling us, we’d be down wind all the way to the finish, which cheered me. I couldn’t visualise how far we had left to go, but I was desperate to see the mile 13 sign we’d passed at the beginning. We were starting to overtake people now. People were tiring and walking and I was really trying to keep running and maintain a comfortable pace. As we headed towards mile 12, we approached another water station on a hill and walked up that one, and around the corner. At the top, there was a lovely family playing music and making noise and that got me running again. We were getting close to the end, but I couldn’t recognise where we were, so I still couldn’t visualise the distance we had left, or what route we were taking to get there.

As we approached a pub, with more music, we saw Gary waiting by the side of the road. He asked to run with us and I was really happy to have him by our side. He told us we had a 1km to go and phoned ahead to let “the others” know we were on our way. He’d already run his half and was back to do a little bit more. He told me his legs were screaming and I remember feeling like that made me feel more normal. At that point, I didn’t have any pain, but I knew that if I stopped it would be pretty tricky to get going again.

It seemed to take forever to run that 1km, but Gary and Arianna (who had stayed by my side for the whole 3 hours it had taken me to run the distance) kept talking at me, keeping me moving and I was beginning to feel strong and determined again. We rounded a corner and there was Annette doing the most ridiculous dance with some foam hands. This bit was a blur, but there seemed to be Harriers everywhere, I remember seeing John and Kate and Holly and Chloe. There just seemed to be people all around me, running with me and spurring me on. It really boosted me along, I couldn’t believe how many people were there. It was an amazing feeling to be running that last section with everyone. I did ask who was going to carry me over the line, but I had no takers and so I pressed on. Some of the Harriers ran ahead and cheered me on as I went into the long run to the finish.

I was feeling amazing as I crossed that finish line. But, the weather wasn’t keen on helping me celebrate and the heavens opened to release a lot of hail on us. It stopped long enough for us to get a coat on and then began again in earnest. I was glad that it held off whilst we were running. The organisers did amazingly on the day, there were a few trees down and volunteers were out, along the route, holding up trees and chopping them back to keep us all moving. So, much so that I only learned it had happened after the race. 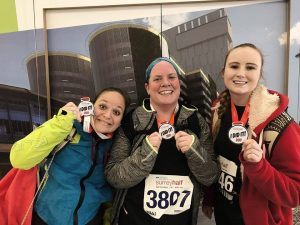 The weather prevented me from thanking everyone that hung around in the wind waiting for me to finally cross the line and who appeared along the route, so thank you! You pushed me over the finish on a high. Thanks to Arianna for running slowly beside me, sticking to my pace and remaining optimistic, even when we were both hurting. I completed it in a “steady” (I prefer the term, slow) 3 hours, 7 minutes and 32 seconds. Onwards to the next half and to completing it in a slightly faster time…