The Fox Ultra – and other things that you should not do with your other half! 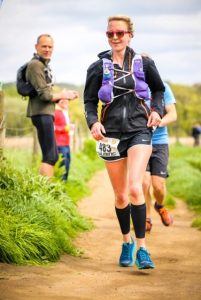 I have always had a tendency to ‘run’ before I can walk and entering The Fox Ultra was no exception. Have I run that far before? No. Had I done any specific training for it? No. Did I enter against the express guidance of my cardiologist? Yes. Did I suggest to and then agree to run with my other half? Yes. What could possibly go wrong?!

Saturday morning, the alarm goes off at 5am. Not a problem. I’m an early-bird. Annoyingly so. Having uncharacteristically organised my kit, fuelling and admin the night before, I was ready to bounce out of the door at 6am. Note that ‘I’ was ready. ‘Some of us’ have a more laisse-faire attitude to alarm setting…nonetheless we leave the house at just after 6am, commenting that we probably lived the closest of any competitor to the start point: quite the luxury.

My gusto continues as we reach registration where fellow competitor, Mr Rowland asks Mr S to ‘kindly ask your wife to stop being so enthusiastic!’ I give a wicked grin and continue my irritatingly smiley, fidgety-dance. We pick up our numbers and timing chips from Mr Peck and co. and head to the race briefing. It was at this point, when the Race Director asks for a show of hands for those taking-on their first ultra, that I realise the enormity of what I had signed up for. I wasn’t an ultra runner! Granted: 3-weeks previously I had completed Manchester marathon in a respectable time and had done a number of trail races – but I had NO IDEA what I was doing or if I was going be able to run that far, particularly looking around the room at some seriously accomplished runners. But I soon forgot about all of that, bounding out of the door and demanding a ‘team photo’ with our mascot Wally and headed to the start – time to get cracking!

Mr S and I had discussed a race plan: we WERE NOT going to go off too quickly and I have to say that this was largely successful and it paid huge dividends later on. We ran with Mr Lockett and Mr Boosey for a short while and then waved them off into the sunrise. We then pottered along quite nicely. As we approached the infamous ‘Kat Hobbs v a herd of bulls’ field in Shackleford, I felt very relaxed. I was in familiar territory, was comfortable in my clothing (risky new jacket and trainer combo) and was enjoying the countryside. Then, as we headed up-and-over the Hogs Back (eating homemade flapjacks) I realised I was really tired (far earlier than I a) expected and b) thought was ideal when you are less than a quarter into a 60km run) but worse: I needed the loo and not in the way that you need details of! Nightmare. And there began a 10km battle of wills to get to the aid station at Worpleston.

Worpleston aid station: lots of Harriers to say hello to, a bounty of refreshments (including grapes: my new fav race food) AND A PORTALOO! And we were good to go. Trotting off down the path, enthusiasm returned, singing re-commenced, ‘that’s what she said’ jokes flying about…and then…DISASTER: Mr S fell over, flat on his face. He was clearly, and instantly, in a lot of pain and we were less than a third into the race. And there ensued a 40km+ battle of patience, will and determination on both our parts.

To his absolute credit, Mr S soldiered on despite his discomfort and considerable lack of mobility. I was proud but also increasingly concerned and infuriated. The Fox has a number of distinct logistical advantages for us Waverley folk: you pass two train stations, it is brilliantly marked (thank you AAT), large parts of the route are familiar (particularly if you have recced them) and you are never further than a (fairly affordable) taxi ride home – perfect for those unfortunate enough to pick up an injury and should be heading home to avoid lasting damage. Or – ignore these sensible suggestions and carry on! Ok – so be it! BUT YOU WILL NOT STOP ME SINGING!

We had recced the Worpleston to Clandon leg the Monday previously and I was grateful for its forgiving, flat tow-paths and grassy fields. The weather was perfect and we made (given the circumstances) pretty good progress through this section. As we approached Clandon, I felt this tremor behind me and turned to see a seriously fast-moving Mr Webb hurtle towards us, leading the marathon. This lifted my mood and lead me into a rousing rendition of ‘I just can’t wait to be King’, much to Mr S’ very visible disgust – I mean, it’s not easy to give your best vocal performance when you’ve just run a marathon and eaten your body weight in flapjacks, but give me some credit…I’d like to see Beyonce give it a go!

Up-and-over the North Downs and we were surrounded by bluebells, dancing gloriously in the sunshine. The decent towards Silent Pool really highlighted the extended time-on-feet and my usual competent downhill skills vanished. We hobbled down the hill like we were in rapidly-setting concrete with a similarly hardening atmosphere..

Into Shere and I am happy to see Mr Newby and Miss Anstey merrily eating ice-creams and shouting words of encouragement. Up the hill and into the infamous ‘Blackheath Triangle’, home of many a lost and bewildered run, I reach for my phone to text Mr Peck to report our imminent and probable disappearance. Happily, we make it through and swiftly reach Wonersh, over-taking some previously vocal fellow competitors. It was at this point I knew we’d make it and I was thoroughly (and again, annoyingly) enjoying it. The tired Shackleford-legs had gone and I was settling into a reassuring rhythm. Every so often I would check in with Mr S, give a couple of verses of Mariah (or was it Whitney?) and chirps of encouragement and skip on down the path.

Up-and-over Bramley golf course and we are on the home stretch. Mr S is moving ok (if you ignore the zombie-like leg dragging, which I was) and we were soon on the last bit of river by Sainsbury’s. A jovial call of ‘HURRY UP’ from Mr McKenna was luckily unnoticed by Mr S (and greeted by an eye-roll from me) and a couple of HIGH-FIVES with the Mini McKennas and we were soon at the finish to a very warm welcome from other competitors and a tidal-wave of Harriers. Never before have I been so glad to see friendly faces and, more importantly – a beer truck!

The Fox Ultra was everything I had imagined – physically tough, mentally tough, a wonderful running adventure in the countryside surrounded by the most supportive people you can meet. I would thoroughly recommend it. Will I do another ultra? Yes. Will I run it with ‘im indoors? Ask me again in a couple of weeks!

My top tips:
1. DO: make sure your shoes and kit are comfortable and it’s not the first time you wear them.
2. DO: recce your route, if at all practicable. It mentally reassuring.
3. DO: some calculations about your required calorie intake and make sure you eat and drink more regularly than you think you need to.
4. DO NOT: be deterred when your audience appears less than impressed by your vocal performance.
5. DO NOT: diagnose your companion’s injury when they are hauling themselves over the North Downs.
6. DO: pace yourself! And be cautious with this. Don’t underestimate the challenge ahead.
7. DO: appreciate where you are and the people around you.