Thank you to Bill Fordham for this account of his experiences at the European Masters Athletics Championships in Denmark.

These were the words that started it all : “There is no ‘qualifying standard’ for international masters competition. If you are 35 years of age or more, can afford the time and money to go, then you can represent your country.”

After joining the Veterans Athletic Club as a second claim member and having my age verified by the British Masters Athletic Federation, I was finally cleared to register as a competitor in the Half-Marathon at the European Masters Athletics Championships (EMACS) in Aarhus, Denmark.

My original plan was to simply compete in the EMACS Half-Marathon wearing a GB vest, but when I arrived I discovered that only two other GB athletes were running in the Men’s 65 category and I was now a team member… better still, only two other teams were competing at that age group and I only had to finish the race to be in contention for a medal in the team event.

Race day arrived and I presented myself to the Control Room to verify that I was wearing the correct kit and had running numbers on my front and back.  I wasn’t feeling 100%, having been suffering with a lingering chest infection, but my plan was to just finish the race and get my medal. The course was quite challenging with many twists and turns, varying surfaces and the weather changing from bright sunshine to lashing rain and some strong gusts of wind from the coast.  My finishing time was 1:52:08.

After the race we learnt that the only two Portuguese M65 runners had included a competitor from an older age group in their team of three to compete against the Germans, the Danes and us Brits.  Fortunately, I had beaten one of the Danish athletes and our combined time was sufficient to give us third place and the Bronze medal. 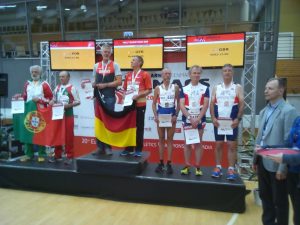 There then followed a very long wait until our medal ceremony, The first presentations were for the male and female individuals in each age group from the 35 year old ‘young ones’ up to 85 year old Italian, Angelo Squadrone, who won with a finishing time of 2:51:46.  Next was the male and female team medal awards and we were finally called up to the dais with the Silver medal winning Portuguese team and the German Gold medalists.  We were presented with our medals and stood to attention for the German national anthem. A proud moment, and one I would have never dreamed of happening five years ago when I started running again after a gap of some twenty years.

The BMAF website is a useful source if anyone wants to find out more about Masters Athletics : www.bmaf.org.uk